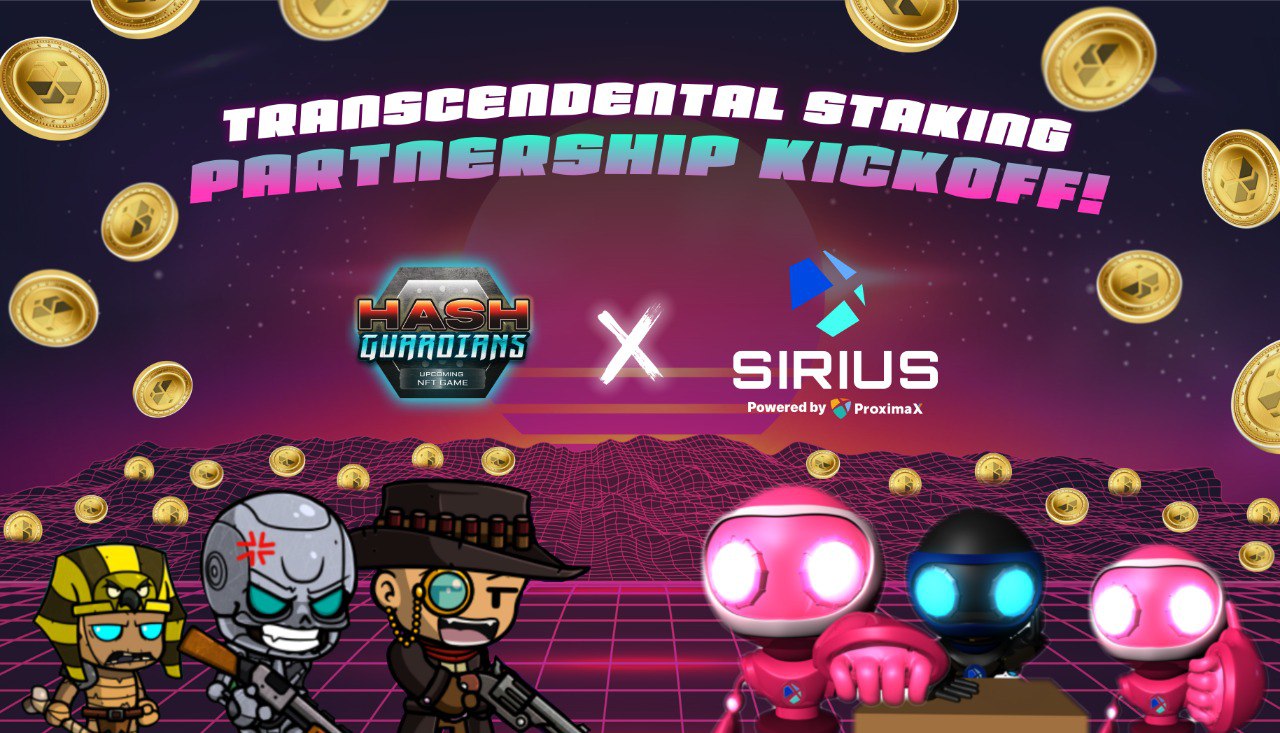 MALTA and GIBRALTAR // August 16, 2022 – In an era of interconnectivity, cross-chain utility still remains an untapped source of potential for encouraging growth between blockchain communities.

HashGuardians and the Stakernauts community are teaming up to provide some of the first cross-chain Gamefi utility on either of their native blockchains – Cardano and the Sirius Chain by ProximaX.  Currently, HashGuardians NFT owners are able to earn passive staking rewards in the form of HashCoins, the in-game currency of the HashGuardians Universe. Starting this September, owners will also have the opportunity to earn staking rewards in the form of MetX, the Gamefi token for the Stakernauts initiative. Dubbed Transcendental Staking, this novel cross-chain staking program marks the first steps for both projects in creating additional cross-chain utility for NFT owners.

Transcendental Staking is an innovative method of staking whereby owners of tokens from other chains can come together, participate in a staking activity, and get rewarded with a cryptocoin from the hosting chain. Stakernauts, a community initiative under the Sirius Chain, is pioneering this method of staking to extend staking and remove barriers that limit the earnings of token holders.

HashGuardians is a leading play-and-earn title being developed on the Cardano blockchain. Launching their NFT-based playable characters during the earliest days of NFTs on Cardano, HashGuardians has consistently been at the forefront of creating functional utility for their players. Staking rewards and the first playable content launched in late 2021, while HashCoin NFT minting and a complete play-and-earn gameplay loop (The Infinity Jump Tower) went live in early 2022.  Most recently, HashGuardians has launched full playable utility for all 10,000 of their NFT characters – a rare feat amongst NFT games on any blockchain. Each HashGuardians NFT is a completely unique, fully-animated playable character ready for adventures throughout the HashGuardians Universe.

“Our mission is to create engaging gameplay that gives the power back to our players,” says F. Katzmarek, HashGuardians CEO.  “We want players to control their assets and reap the rewards of being part of the HashGuardians community. We are excited to welcome the ProximaX and Stakernauts community to HashGuardians and appreciate this opportunity to further increase the utility of our NFT collection.”

HashGuardians NFT and MetX holders that opt into the staking program will be able to register their Sirius wallet address for monthly MetX airdrops. Reward amounts will vary, depending on the number of HashGuardians NFTs and MetX held in the users’ respective blockchain wallets. MetX has a three-part utility on the Sirius Chain, where it serves as the token of choice for ecosystem Gamefi projects. Alongside the Stakernauts’ cross-chain collaborations, MetX will be used in Xarcade – a gaming focused marketplace, and MetaXar – an interactive experience focused on gamifying the link between blockchain gaming projects. Read here for specific information on how to stake.

By building bridges across blockchains, HashGuardians and the Stakernauts seek to take early initiative in exploring the potential of cross-chain collaborations. With their strong presence in the Asia Pacific region, Stakernauts represent some of the fastest growing markets for blockchain gaming enthusiasts, while HashGuardians’ strong presence in the North American and European markets helps connect existing NFT collectors to the Stakernauts community.

Stakernauts’ mission is to break down blockchain barriers to build a community of communities. It is driven by the need to bring together an entirely fragmented cryptospace and form a guild of sorts so that communities can share their common goal of earning collectively and cross promoting projects that can be mutually beneficial to all parties.

Stakernauts is promoted by the people who created the Sirius Chain by ProximaX as part of a bigger picture. It is envisioned that the communities of Stakernauts will be involved in Xarcade – a games marketplace , and MetaXar – a Metaverse project-  by Sirius Chain. Further, it is hoped that HashGuardians will be among the firsts to roll out its project in the Metaverse and offer its community an “extended play” of their activities and earn beyond its own rewards – thereby giving its players a multiplier earning effect.

About HashGuardians:
With a focus on the intersection of blockchain technology and engaging, fun gameplay, HashGuardians is developing a multifaceted project with elements designed to appeal to any gamer or blockchain enthusiast. Pre-Alpha gameplay content is now available for HashGuardians NFT holders. Built upon the Cardano blockchain and featuring a play-and-earn economic model, the HashGuardians Universe will enable players to directly benefit from gameplay through claimable NFTs and HashCoins (in-game currency). Players earn rewards both passively and actively, and will have opportunities to engage in mini-games, quests, and adventures whether they have 15 minutes or 2 hours available.

About ProximaX
Sirius by ProximaX is a next generation blockchain with advanced built-in features such as multi-layer multisig, validator rewards, fast finality, cross-chain swaps and much more. The Sirius chain forms the core of the Sirius infrastructure and development platform which has other built in layers such as storage, streaming, database, and Supercontracts. Developed as a stack, more layers such as AI and distributed computing can be added to this platform without compromising performance. With APIs and SDKs that are programmable in multiple languages, Sirius promises ease of use and efficiency for all kinds of dApps.